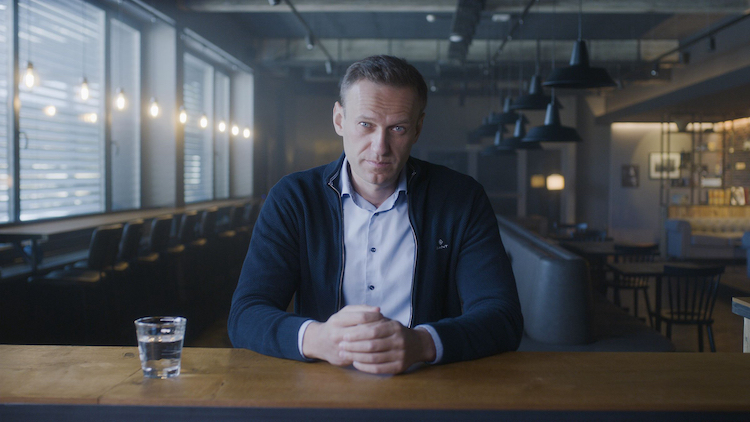 PARK CITY, UTAH — January, 24, 2022 – The nonprofit Sundance Institute announced today that the 2022 Sundance Film Festival will world premiere Navalny as the tenth and final film in the U.S. Documentary Competition section. Kept under wraps until now, the film premiere will be the culmination of the Festival’s online premieres rollout and will debut 24 hours from now, tomorrow evening, January 25, at 6 p.m. Mountain Time. Directed by Daniel Roher, who had unparalleled access to its subject and his inner circle, the film is a revealing documentary thriller about Russian opposition leader and anti-corruption activist Alexei Navalny. Tickets are on sale now at Festival.Sundance.org.

“We are delighted to have Navalny at this year’s Festival,” said Tabitha Jackson, the Festival’s Director. “When we saw this film in the early fall we all immediately knew that we wanted it and would wait for it: riveting cinema in the present tense, incredible access, intrepid investigative journalism, a compelling protagonist speaking truth to power – all beautifully edited, directed and produced into a timely non-fiction thriller that deals with the  highest of stakes for freedom of expression.”

“Boldly confronting injustice through cinematic storytelling has been threaded into Sundance’s DNA since its inception. My team and I can’t imagine premiering at any other festival. We are thrilled that Sundance audiences will be the first to see our film and witness the extraordinary courage of Alexei Navalny,” said director Daniel Roher.

In August 2020, a plane traveling from Siberia to Moscow made an emergency landing. One of its passengers, Russian opposition leader Alexei Navalny, was deathly ill. After he was taken to a local Siberian hospital and eventually evacuated to Berlin, German authorities confirmed that he had been poisoned with Novichok, a nerve agent implicated in attacks on other opponents of the Russian government. President Vladimir Putin immediately cast doubt on the findings and denied any involvement.

While he was recovering, Navalny and his team — already with a large social media following in tow — partnered with the data investigative journalism outlet Bellingcat as well as other international news organizations, including CNN, to investigate his attempted assassination and find proof of the Kremlin’s involvement. In Navalny, filmmaker Daniel Roher reveals a courageous and controversial would-be president at the precipice of sacrificing himself in order to bring reform to his homeland. The film is directed by Daniel Roher and produced by Diane Becker, Melanie Miller, Shane Boris and Odessa Rae.

The 2022 Sundance FIlm Festival is currently taking place online at Festival.Sundance.org; on The Spaceship, a bespoke immersive platform; and in person at seven Satellite Screens venues around the country during the Festival’s second weekend. The Festival ends on January 30, 2022.

The Sundance Film Festival is the flagship public program of Sundance Institute. Throughout the year, the majority of the Institute’s resources support independent artists around the world as they make and develop new work through access to Labs, direct grants, fellowships, residencies, and other strategic and tactical support.

The Sundance Film Festival
The Sundance Film Festival has introduced global audiences to some of the most groundbreaking films of the past three decades, including Flee, CODA, Passing, Summer Of Soul (…or, When the Revolution Could Not Be Televised), Clemency, Never Rarely Sometimes Always, Zola, On The Record, Boys State, The Farewell, Honeyland, One Child Nation, The Souvenir, The Infiltrators, Sorry to Bother You, Won’t You Be My Neighbor?, Hereditary, Call Me By Your Name, Get Out, The Big Sick, Mudbound, Fruitvale Station, Whiplash, Brooklyn, Precious, The Cove, Little Miss Sunshine, An Inconvenient Truth, Napoleon Dynamite, Hedwig and the Angry Inch, Reservoir Dogs and sex, lies, and videotape.

Sundance Institute
As a champion and curator of independent stories for the stage and screen, Sundance Institute provides and preserves the space for artists in film, theatre, film composing, and digital media to create and thrive.
Founded in 1981 by Robert Redford, the Institute’s signature Labs, granting, and mentorship programs, dedicated to developing new work, take place throughout the year in the U.S. and internationally. Sundance Collab, a digital community platform, brings artists together to learn from each other and Sundance advisors and connect in a creative space, developing and sharing works in progress. The Sundance Film Festival and other public programs connect audiences and artists to ignite new ideas, discover original voices, and build a community dedicated to independent storytelling. Sundance Institute has supported such projects as Clemency, Never Rarely Sometimes Always, Zola, On The Record, Boys State, The Farewell, Honeyland, One Child Nation, The Souvenir, The Infiltrators, Sorry to Bother You, Won’t You Be My Neighbor?, Hereditary, Call Me By Your Name, Get Out, The Big Sick, Mudbound, Fruitvale Station, City So Real, Top of the Lake, Between the World & Me, Wild Goose Dreams and Fun Home. Join the Sundance Institute on Facebook, Instagram, Twitter and YouTube.