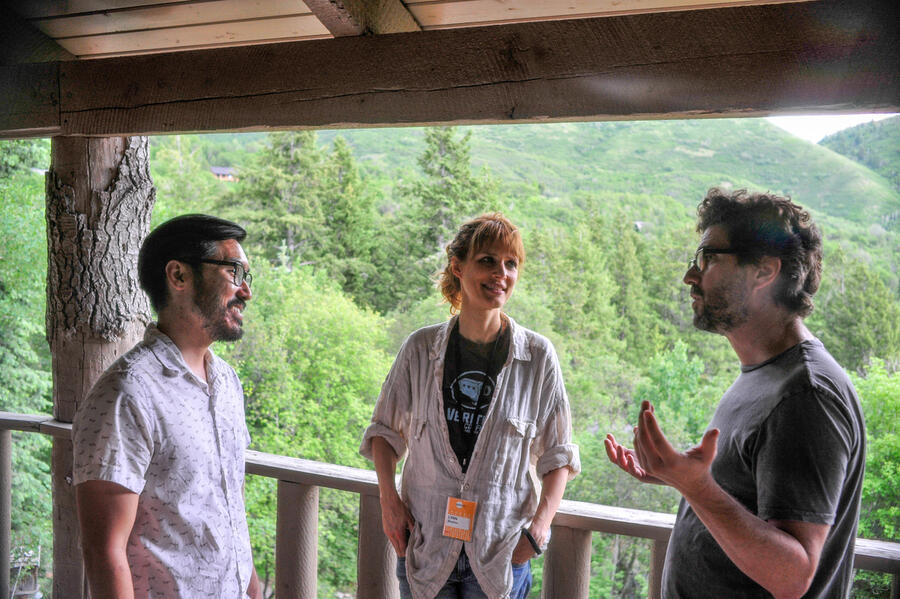 The launch of our first online Sundance Film Festival amid the backdrop of the COVID-19 pandemic, planning our inaugural Sundance Film Festival: Asia, the creation of our new Interdisciplinary Program — a lot has happened in the 2020s, despite the fact that we’re less than two years into this new decade.

As we wrap up our #Sundance40th campaign, we’re so grateful to those of you who have showed your support for the next generation of independent storytellers. As a nonprofit, we’ve been able to offer these vital artist support programs thanks to the generosity of people like you — people who understand the impact that storytelling can have on our culture at large.

To learn even more about the Institute through the years, from 1981 through today, see the master timeline created by the Sundance Institute archives team. Here’s a quick look at some of our most recent milestones.

2020: Amid the backdrop of the COVID-19 pandemic, the Institute launches its Respond & Reimagine Plan to support independent artists; takes its artist labs online via Sundance Collab; and establishes the Sundance Institute Collective, the latest iteration of our alumni program. Tabitha Jackson is announced as the new Festival director.

2021: The Sundance Film Festival rolls out online for the first time ever, and also reaches new audiences via Satellite Screens across the country; our Interdisciplinary Program is rolled out to support artists working in new media, music, and theater; the inaugural Sundance Film Festival: Asia is announced for the fall.

2022: For a sneak peek at what we have planned for the 2022 Festival, check out this message from Festival director Tabitha Jackson.

Stay tuned — later this month we’ll offer up a lengthy streaming watchlist of features that have come through the labs over the years.

Writer-director-actor Radha Blank brought her knockout feature debut through the 2017 Screenwriters and Directors Labs before it premiered at the 2020 Sundance Film Festival in Park City. Blank took home the Directing Award: U.S. Dramatic and was later the recipient of the 2020 Vanguard Award.

At this year’s Festival, Sian Heder’s drama CODA — a story about the only hearing member of a deaf family — took home the Audience Award and Directing Award in the U.S. Dramatic Competition; it also won a Special Jury Prize for Ensemble Cast and the U.S. Grand Jury Prize: Dramatic. Told authentically with deaf actors, the project has captivated audiences and critics alike; see it when it arrives in theaters later this month.

With the world premiere of Crip Camp at the 2020 Festival, directors Nicole Newnham and Jim LeBrecht brought to life the story of a group of ’70s campers turned activists who shaped the future of the disability-rights movement and changed accessibility legislation for everyone. LeBrecht himself was one of those campers, and he and Newnham imbue their documentary with the spirit, music, and humor of the era. Crip Camp was supported by the Institute’s Documentary Film Fund, Producing Summit, Catalyst, and Documentary Edit and Story Lab.

I WAS A SIMPLE MAN

Six years after bringing I Was a Simple Man through our Screenwriters and Directors Labs, Christopher Makoto Yogi brought his debut feature to the 2021 Sundance Film Festival. The family drama was acquired by Strand Releasing and is set to hit U.S. theaters later this year.

Lyle Mitchell Corbine Jr.’s Wild Indian was incubated in our 2017 Screenwriters Lab and our 2018 Screenwriters and Directors Labs before its world premiere at this year’s Festival as part of our U.S. Dramatic Competition. The project is slated for release later this year.

BEFORE YOU GO: Through the month of August, we’re looking to raise vital funds to support the next generation of storytellers as we commemorate our 40th year as an Institute. Will you join us? Donate now.