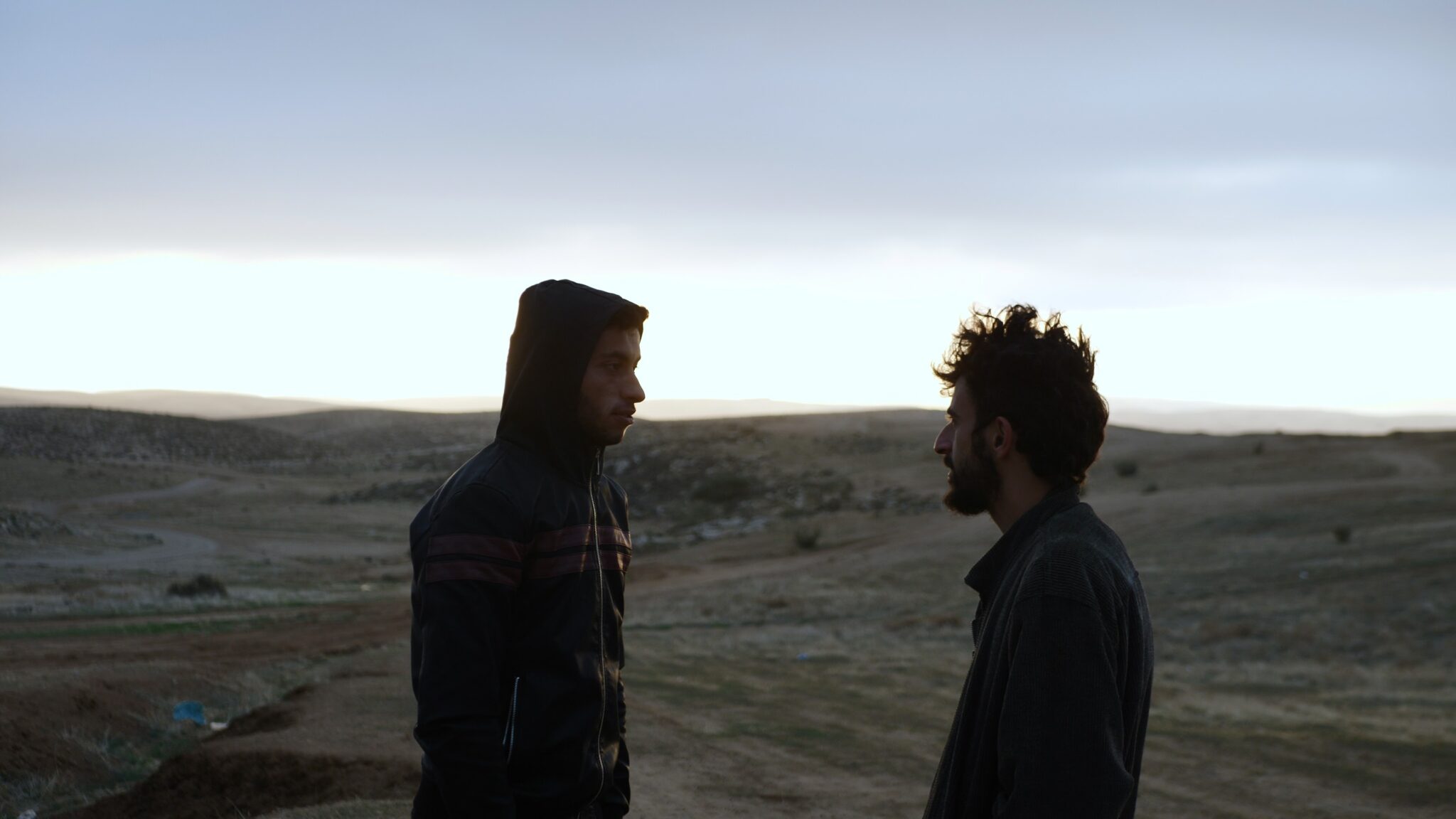 No Other Land: Two young men stand facing each other in conversation within a vast, hilly landscape.

Los Angeles, CA — The nonprofit Sundance Institute’s Documentary Film Program (DFP) announced today its latest cohort of 20 nonfiction films receiving Sundance Institute Documentary Fund Grants. The fund offers non-recoupable support for nonfiction projects that continue to elevate and advance cultural dialogue and break new ground in creativity and innovation from filmmakers with a distinct voice and vision, and a meaningful connection to the work they create.

The Documentary Fund supports the work of nonfiction filmmakers from around the globe. In a changing media landscape, the fund has been a critical force in supporting work that has expressed the world in creative, complex, and provocative ways, and has created real cultural and social impact around some of the most pressing issues of our time.

A total of $600,000 in unrestricted grant support has been provided to the projects in various stages of production and distribution, including eight in development, eight in production, three in post-production, and one in post-production and impact. The projects’ subject matter take on topics of disability, feminist history, globalization, grief and loss, and housing inequality, among other areas. Grants are made possible by The Open Society Foundations, the John D. and Catherine T. MacArthur Foundation, and the Kendeda Fund.

This cycle, eight out of the ten U.S. films granted are helmed by at least one BIPOC director. This statistic reflects  the fund’s commitment to emerging artists whose voices have been historically marginalized in hegemonic Western societies. Globally, half of the projects supported have international roots in regions that the DFP prioritizes  because freedom of expression is at risk, or due to local infrastructures that lack adequate support mechanisms for independent film.

“With this expansive cohort, the Documentary Film Fund is holding true to its commitment to independent storytelling. As we celebrate 20 years of funding hundreds of films, these films are a tangible representation of all that we stand for and value,” said Carrie Lozano, Sundance Institute, Director of Documentary Film Program and Artist Programs.

“We are thrilled to welcome this latest cohort of exceptional nonfiction artists to the Sundance family. The projects selected embrace an incredibly eclectic range of cinematic languages that expands the vocabulary of documentary film. But they also share a common denominator, which expresses the spirit of Sundance. These stories get us out of our comfort zone and challenge our received world-views and assumptions by constantly pushing us to do better as a society and as people,” said Paola Mottura, Documentary Film Fund Director.

The Documentary Fund supports the work of nonfiction filmmakers from around the globe. In a changing media landscape, the fund has been a critical force in supporting work that has expressed the world in creative, complex, and provocative ways, and has created real cultural and social impact around some of the most pressing issues of our time.

On March 3rd 1734, Anna Borges do Sacramento, an Afro-descendant Brazilian slave, brought a civil action against her first owner, to maintain her “free” status, acquired 16 years earlier. Her history, archived and practically unknown, reveals the iniquity of the legal devices that for centuries sustained the legality of the slave system.

From the speech therapy process that I took, many questions about the voice arose, about my own voice and how it sounded. An intimate and family portrait that tries to face the search about questioning oneself, and above all questioning one’s own voice, and understanding it as identity.

A death row inmate confesses to a crime after 30 years of maintaining his innocence. Now, an activist who once fought for his exoneration is faced with the moral dilemma of whether the fight was in vain. Chain of Rocks is an animated feature-length documentary that explores the complexities of race and masculinity and how they skew our worldview and play a role in oppressive systems.

Maikhuu is one of thousands of coal truck drivers fighting for survival along Mongolia’s hazardous mining roads. Her story encapsulates the dilemma the country is experiencing as its decade-long mining boom continues to shake the society.

The Past is Waiting Up Ahead (Guatemala, U.S.A.)

Revisiting the route he traveled as an unaccompanied minor when he was eight, poet Javier Zamora has taken it upon himself to confront his past and discover how the undocumented route from Central America to the United States has changed in the last twenty years.

unseen is a multi-platform documentary that follows the story of Pedro, an aspiring social worker who happens to be a blind, undocumented immigrant. Through Pedro’s personal journey, this “audio-based” film reimagines the accessibility of cinema, while exploring the systemic intersections of immigration, disability, and mental health.

Bangladesh is the largest delta of the world where floods become devastating during each summer. When winter arrives, an island emerges beside the Jamuna river and a homeless mother serves there as cheap labor, caught in a modern slavery system. She fights to break down this chain of subjugation.

During a civil war in the Central African Republic, an immigrant Chinese construction manager and a local African laborer work on opposite ends of the spectrum to construct a sparkling new bank. As deadlines loom, they don’t hesitate to strip the earth and destroy their family lives for a seat at the table of prosperity.

The documentary tells the stories of a group of subdivided flat residents who live in the same building for over a few years. Having little control over their destinies, individuals wrestle with immense suppression of the times, yet flourish with dignity in their everyday lives.

No Other Land (Palestine)

For ten years, Basel, a young Palestinian activist, has been filming homes in his community being destroyed by Israeli soldiers. During the darkest period of his life, in face of mass eviction of his community, he develops an unlikely, intimate relationship with a similarly aged Israeli journalist who joins his struggle.

After a young filmmaker is diagnosed with a terminal brain tumor, he decides to follow his family’s spiritual and darkly humorous journey towards acceptance.

After living in seclusion with his books for 26 years, Shen Wei, an erudite trash collector, inadvertently became a viral sensation thanks to a live streaming app, where he was venerated by millions of followers as China’s “Vagrant Master”. The overnight fame reintroduced Shen to a society that once left him behind. When the frenzy abruptly subsided two years later, however, Shen found himself caught in a dilemma and started to lose control of his life.

On its surface, Third Act is a biopic that explores Robert Nakamura’s role as the “Godfather of Asian American film,” made by his son, Tadashi Nakamura. But with his diagnosis of Parkinson’s disease, the film poses a complex question: how can a father and son say goodbye?

Good intentions, unforeseen consequences, and the forces of the Internet collide, revealing the humanity—and the humans—confronting the unprecedented power of social media.

A feature documentary about the rise and fall of California’s system of indefinite solitary confinement.

A collection of interviews about mental health and suicide, interrupted by fake commercials, reality tv parodies, animations and archival footage. Watertight flips through channels, traveling around Indian country and big cities, following people who create their own realities. This film is for freaks.

Dancing on the Edge of a Volcano (Lebanon, France)

A country that experiences one disaster after another. A film crew that surmounts the insurmountable to shoot their vision of Lebanon’s future. A portrait of Beirut society in the aftermath of the August 4th 2020 port explosion, struggling to rebuild, resist, and ultimately find life again.

Hidden Letters tells the story of two Chinese women trying to balance their lives as independent women in modern China while confronting the traditional identity that defines but also oppresses them. Connected through their love for Nushu — a centuries-old secret text shared amongst women — each of them transforms through a pivotal period of their lives and takes a step closer to becoming the individuals they know they can be.

Spurred by the spectacle of a circus tent that goes up outside his Oakland apartment, a disabled filmmaker launches into an unflinching meditation on freakdom, (in)visibility, and the pursuit of individual agency.

Miami is ground zero for sea level rise. When residents of the Liberty Square public-housing community learn about a $300 million revitalization project in 2015, they soon discover that this sudden interest comes from the fact that their neighborhood is located on the highest-and-driest ground in the city. Now they must prepare to fight a new form of racial injustice – Climate Gentrification.

As a champion and curator of independent stories for the stage and screen, the nonprofit Sundance Institute provides and preserves the space for artists in film, theatre, film composing, and digital media to create and thrive. Founded in 1981 by Robert Redford, the Institute’s signature Labs, granting, and mentorship programs which are dedicated to developing new work and take place throughout the year in the U.S. and internationally, are supported largely through contributed revenue. Sundance Collab, a digital community platform, brings artists together to learn from each other and Sundance Advisors and connect in a creative space, developing and sharing works in progress.