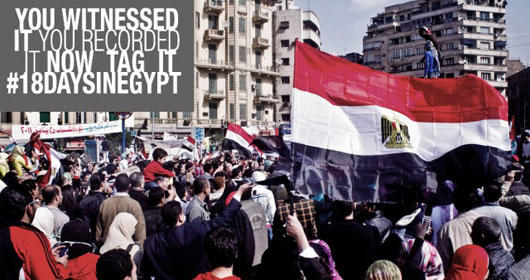 I recently Skyped with the creative team of the New Frontier Story Lab’s alumni project 18 Days In Egypt as part of our periodic alumni check-in sessions. Co-creator Jigar Mehta called in from the Bay Area, where he is a principal at Matter. and working to accelerate projects like 18 Days In Egypt that use story enabling technology to tell or co-create stories that change the world.  Jigar’s collaborator Yasmin Elayat, however, called in from Cairo, in the midst of a world-changing moment.

My first question was, “Yasmin, where are you?” In the few emails we exchanged to set up the call she seemed so “normal” and her warm greeting on the phone made me think she might be in the States or traveling abroad somewhere—she couldn’t possibly be in the middle of the Egyptian unrest I was watching on TV, could she?  “I’m in Cairo.”

I began a barrage of questions about her and her family’s safety and their experience with the current events. She responded with words and phrases like, “violent,” “scary,” “the worst I’ve seen,” “civilian on civilian,” “civilians on the state,” “the state on civilians,” and “army tanks are everywhere.”

Her personal experience was limited to abiding by the military’s 7 p.m. curfew and listening to gunshots ring out in her neighborhood.  I found solace in her assurance that she and her family were not directly impacted. However, I was saddened to learn that some of her acquaintances and journalist colleagues had been touched by the violence—detained, arrested, caught between fights, and having bore witness to some of the more heart wrenching scenes of the conflict, like the overrun city morgue. “I know people who were killed, but no loved ones.” It was surreal for me to hear her accounts, sitting in my California home looking out on a peaceful mountain view.

We proceeded to have this alumni check-in session about 18 Days In Egypt, a landmark project in the evolution of citizen’s journalism and crowdsourced documentary storytelling. Jigar and Yasmin created the project in 2011 to provide a platform for citizens to record the Egyptian revolution in real time.

“Throughout the 18 days of the 2011 uprising—in the year since—and now—Egyptians are filming pivotal events on their cell phones, taking pictures, texting, tweeting and facebooking their extraordinary bid for freedom. Now, “18 Days In Egypt”, the collaborative documentary project, aims to capture the events of the revolution right here, in an interactive documentary website that everyone can access now and into the future.” -18DaysofEgypt.com

The phrase “…and into the future” was a very insightful, almost prophetic, description of the value of this project. Jigar explained that the site holds an archive of citizen-generated stories that range from the 18-day period where millions participated in demonstrations, marches, plaza occupations, riots, non-violent civil resistance, acts of civil disobedience, and labor strikes that overthrew President Hosni Mubarak in the beginning of 2011 to the beginning of 2013, which chronicled the “ongoing” revolution.

Yasmin described the feeling of unity and excitement about the progress of democracy that she and other Egyptians had back in 2011—feelings captured by user-contributed stories on their site. Those feelings were then compared to the utter confusion and fear penetrating her experience of recent events. When I asked Yasmin to contextualize the 18 Days In Egypt project in terms of the current climate, she said, “When I look at the stories on the site in context of what is happening now, I feel like my community is suffering from a collective amnesia.”

“That moment doesn’t exist anymore,” added Jigar. We can’t tell stories of that moment now the way they were told in that moment, because the stories we tell now are tainted by hind site…they lose the immediacy of the stories told in real time.” The personal narrative contextualized the meta-story of that time and now they provide a reflection point. Jigar continued, “It was critical we got those stories in the moment. Those 18 Days feel like a million years ago, now. That’s why it was so important for us to move quickly, then. We knew we had to get the stories in the moment, before we forgot.”

For this nascent form of real-time documentary storytelling and citizens’ journalism, 18 Days In Egypt provided a lot of lessons learned. From technical things like how to best design a site to give users a rich experience, to organizational issues like how to bring on institutional partners who can better manage and sustain the community congregated by the project, this project has been a valuable case study to future storytellers.

“What do you think is this project’s greatest contribution to the future of storytelling?” I asked Jigar. “Process innovation,” he said. One of the biggest challenges for artists working at the convergence of filmmaking and creative coding is the tension of two very different processes. Filmmakers are accustom to perfecting their stories in the editing room before exposing it to the world, whereas coders are adept at the iterative process of making things fast, making them available in their rough state to the public and iterating to perfect the product overtime by responding to its failure. Jigar and Yasmin were courageous enough to explore the idea of being iterative in the storytelling process.

So what’s next? “Adding a narrative layer over the archive of stories for reflection,” say Jigar and Yasmin. Again, leveraging the benefit of collective real-time storytelling, its ability to counter collective amnesia.

I asked them to send some of their favorite stories from 18DaysofEgypt.com. Although they bemoaned the task of having to select only a few out of the hundreds they love, they sent the following:

A Smile of Hope, by Ahmed El Shamy
http://beta.18daysinegypt.com/#/explore/streams/1139
From May 24, 2012. This story covers Egyptians going to vote in the first-ever free presidential elections to elect a civilian president. The country is still full of so much hope and elation at the initial round of elections. (My own family members waited 6 hours in line to vote for the first time in their lives)

The Motorcycle Heroes, by Mostafa Sheshtawy
http://beta.18daysinegypt.com/#/explore/streams/898
From Feb 3, 2012. A tribute to the men on motorcycles who volunteer to take sick and injured to field hospitals because ambulances can’t reach tight and crowded areas of clashes.

EgyArmy suspends Jul8 sit-in by force in Tahrir, by Maggie Osama
http://beta.18daysinegypt.com/#/explore/streams/830
From August 1, 2011. In light of the recent forced bloody and violent dispersal of the pro-Morsi sit-in by security forces (Wed Aug 14, 2013), this story is about the Tahrir dispersal back in the summer of 2011.

Diary of Ahmed Tarek, by Ahmed Tarek Medhat & Mostafa Sheshtawy
http://beta.18daysinegypt.com/#/explore/streams/617
From Jan 29, 2011. Ahmed Tarek, like other Egyptians, takes newfound ownership of his streets after the revolution, and he volunteers his time to keep the streets and the square clean.

اغاني الثورة (Songs of the Revolution), by Adham Abou Einien, Sara ElKamel, Mohamed El-Shinnawy
http://beta.18daysinegypt.com/#/explore/streams/532
From Jan 25, 2011 (and the 18 Days). One of the oldest submissions on 18DaysInEgypt. This is a collection of all the popular songs of the revolution from those first 18 days (many subtitled in youtube). The first song is called The Sound of Freedom (Sout al Horeya), the 2nd Hey Square (Ya El Midan), the 3rd Bread Freedom, 4th is Leader Required, etc.

“No Walls, Just Art”
http://beta.18daysinegypt.com/og.php?sid=1056
By Sara Elkamel
From Mar 9, 2012. This story captures the moment when artists painted protest art on walls that had sprung up all over Cairo by the Army.

“the picture that almost got me killed”
http://beta.18daysinegypt.com/og.php?sid=706
By Mostafa Sheshtawy
From Dec 17, 2011. This story is a reflection by photojournalist Mostafa Sheshtawy on how he captured an amazing photo during the #occupycabinet protest

“Tough Task of A Truce”
http://beta.18daysinegypt.com/og.php?sid=893
By Shadi Rahimi and Youssif Salah
From Feb 4, 2012. This story captures the moment of demonstrators attempting to stop the fighting between protesters and security forces.